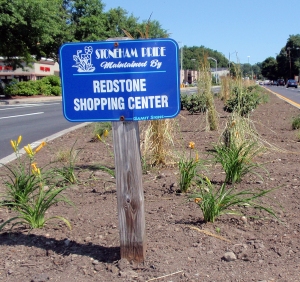 Now THIS is the kind of post I like to write! (And I also hope to do a LOT more like yesterday’s Stoneham Fire Dept. follow-up. I whole-heartedly believe in giving positive recognition where it is due. That’s equally important as accountability, as far as I’m concerned.) As many readers probably know, Selectmen Ann Marie O’Neill and Tom Boussy recently launched the Stoneham Pride island beautification program. I was excited when I heard about it last month because, well, the islands around Town were nothing to be proud of.

The program has taken off and I was excited to drive by Redstone Plaza to see Redstone had sponsored the main island in front of the shopping center, and that the early stages of planting had begun. Of course I had to pull over and take some photos: 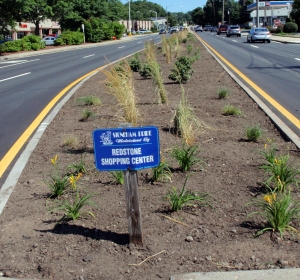 The island is still a work-in-progress and has a lot of growing/ filling in to do, but I love seeing visible change! I hope other area businesses who haven’t signed on will take advantage of the program. Especially businesses who have these types of plots in front of them that look, well… I will save that for another post if I don’t see proactive improvements.